Beaufort Court  >  ABOUT US  >  Building Conversion 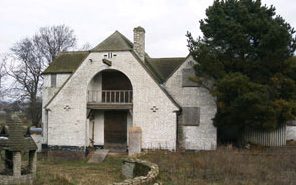 The original Egg Farm buildings now form the basis for the low carbon building at Beaufort Court. Since the local planning authority required that the external appearance of the building must remain largely unchanged, the conversion of the existing 'horseshoe' and coach house into energy-efficient offices with a modern education centre needed some major reconstruction.

Whilst the distinctive tiled roof structure and the twin towers were retained, the rest of the building was extensively modified. The ground floor of the horseshoe building was lowered, and then extended into the inner courtyard by 5m, to increase the working area. Turf was planted on the roof of the new office space, providing attractive insulation. The upper level floor and the roof were reinforced, and the outer external wall rebuilt. A new single storey link, incorporating the main entrance, was built to connect between the two wings.

A third, entirely new building was constructed on the Northern perimeter of the site, to provide storage for the harvested biomass crop. To avoid intruding into the landscape, it was constructed partly below ground with the excavated earth being banked up against the outer wall, and then planted. The inward-facing sloping roof carries the large solar-cell array, producing electricity and heat from the sun.

The triangular site comprises 7 ha of farmland located in the metropolitan green belt. The boundary of the site is formed, to the south, by the M25 orbital motorway; to the west, by the mainline London to Glasgow railway; and, to the north-east, by a private road. The egg farm is set out on an axis, which, if extended northwards, aligns with the Ovaltine factory - the destination of all the eggs laid on the old farm.