Harnessing the kinetic energy of the wind does not produce any carbon dioxide and provides clean, reliable electricity. 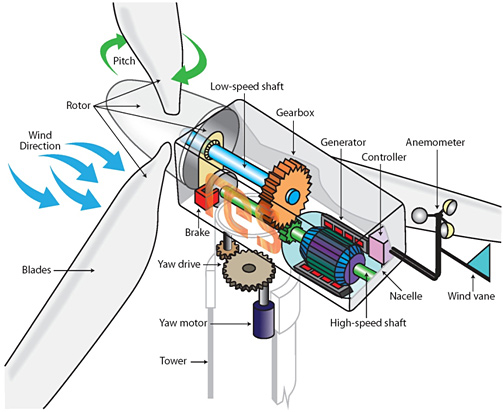 How does it work?

The wind forces the rotor of a turbine to turn and with it the low speed shaft (blue) inside the nacelle. This is linked to a gearbox, which in turn increases the rotational speed in the high speed shaft (green), which spins inside the generator's static magnets to generate electricity. This process will start when the wind speed is sufficient, and shut down when it reaches the maximum for which it has been designed. The anemometer monitors the wind speed. The wind vane detects the wind's direction, and regularly directs the nacelle to 'yaw' into the wind. If it has turned two and a half times in the same direction, it will stop and untwist itself automatically.

The turbine at Beaufort Court was manufactured in 1995 and bought second hand in 2003. It is 36m to the top of the nacelle and the diameter of the rotor is 29m. This turbine can generate sufficient electricity for 30-40 homes. It has variable pitch blades: at lower wind speeds, their 'pitch' adjusts to maximise the wind energy captured, whilst at very high wind speeds they can limit it. When the turbine shuts down, its blades will 'feather' or pitch out of the wind. It has a dual fixed speed rotor at 30 or 40 rpm. The generator's speed is limited by the grid's frequency (50Hz), so an increase in wind speed does not affect the shaft or rotor speed, but instead adds to the torque on the generator shaft, which translates into a higher electrical output. The generator speed is 760-1000rpm.

Yes. Wind turbines will generate electricity most of the time (70-85%) for 20-25 years. Their actual output varies with wind speed, but any variability in the supply of electricity this creates is managed by our national grid, which is already designed to cope with far bigger variations both in supply (e.g. when a large power station trips) and demand (e.g. during the World Cup final). The output from UK onshore wind farms is consistent over the course of a year: around 30% of their theoretical maximum (compared with 50% for power stations). This 'capacity factor' is sometimes confused with 'efficiency' (how much of the wind's energy a turbine will capture) which is not relevant in a system where the fuel, wind - is free.

At a distance of 300 meters, a typical modern wind turbine is no noisier than a kitchen refrigerator or a moderately quiet room. Strict rules are applied by local authorities to ensure that wind turbines are far enough from nearby houses to avoid causing disturbance. Sensitive siting and layout design can keep noise impact to a minimum.